I wound out up at Crave after an adjustment to my original plan to go to 112 Eatery to check out Isaac Becker’s cuisine (I recently mentioned him in my Top Tips from Food Network Magazine blog). Luckily, the walk to 112 Eatery from my hotel room was only about 15 minutes. Unluckily, when I arrived there was a flyer on the door that it was closed for kitchen renovations and would reopen the next day. Sigh, major sigh.  Especially walking with plantar fasciitis. However, a cool looking place, Crave, was right across the street from my hotel. Thank you, renovation gods, what a great experience I had at Crave!

I decided to sit at the bar, which was a great thing because my bartender Justin rocked (as did the other bartender who was taking care of the other end of the bar, but did talk to me some when Justin went on break.) I ordered a glass of Coppola Sauvignon Blanc ($9.95) that was good as usual. 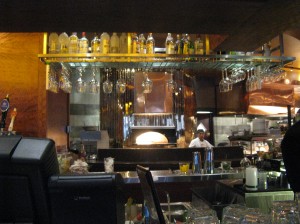 I wasn’t sure what choices I’d have at Crave due to being a pescatarian, but after checking out the menu there were several choices that would work, so I asked Justin for his opinions on a number of selections. Crave has a separate sushi menu, and I wanted to know about the Mexican Speciality roll, which he said was Crave’s best sushi seller. This roll consists of tuna, escolar, jalapeno, avocado, cilantro, spicy mayo and soy citrus sauce for $17.95. This is tops on my list on a return visit.

I also asked Justin about Lobster mac and cheese, but he thought it would be too heavy for me since I had told him I wasn’t too hungry. He suggested the pesto shrimp crostini ($12.95) – one of his favs. The pesto is made with pistachios instead of pine nuts. This dish rocked! The crusitini was nice and crisp, the shrimp was tender and cooked just right, and the pesto was awesome. The parmesean cheese on top was perfect! The two women sitting next to me decided to order this as well, and they were as happy with this dish as I was. The serving was perfect – four shrimp crustinis were all I needed.

There were a couple of guys sitting across from me that had the fresh Margherita pizza ($12.95). Judging by how long it stayed on the plate, I would guess it was very tasty. The guy next to me ordered from the sushi menu and got one of the rolls – not sure which one. Again, it wasn’t on his plate long, and I heard him tell Justin that it was excellent. 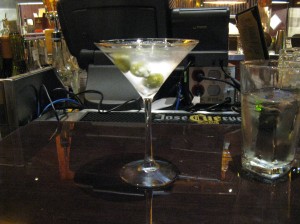 I decided to try one of Crave’s martinis, which tops the list of coctails on the Specialty Drink Menu. Once I found out that Crave stuffs the bleu cheese olives in-house, I decided to try that. Very good, extremely dry (especially since I asked him to leave out the vermouth.) I have had better bleu cheese stuffed olives, but these were tasty.

Crave has a rooftop bar that I did not visit that night, but I will on my next visit (it looked very cool from the rooftop bar at Solera, which I did visit and will be reviewing soon.) The atmosphere in the main restaurant is very cool, and two sides of the place have huge windows, wall to wall.