Posted on October 2, 2011 by kelleychisholm

Been to Cameron Village in Raleigh lately for food and drinks? If not, you should – there are a number of great restaurants/pubs worthy of those in the 70s and 80s when things were in full swing in the Village Underground and other places in the center.

Longtime Raleighites will remember The Pier, Café Deju Vu, the Frog and the Nightgown and later the Bear’s Den, which were located beneath what is now the public library/Fresh Market. The Underground was one of the best clubbing destinations in Raleigh in its prime, with performances from the likes of the Ramones, Joan Jett, Pat Benatar, Jimmy Buffet, Bette Midler, the Dead Kennedys, R.E.M., Arlo Guthrie, Thelonius Monk, the Violent Femmes and even Barry Manilow, just to mention a handful.

After the underground closed, Cameron Village lost some of its appeal as a nightlife destination. But I am happy to report that things recently have been looking up lately, with choices such as the Village Draft House, Cameron Bar and Grill, Café Caturra and Cantina 18. While these places usually do not offer live entertainment, they do serve up tasty food and drinks that won’t bust your budget.

I’m always at a loss for what to put in Brad’s Christmas stocking, so last year I thought it would be fun to include $20.00 gift certificates to a few CV venues. The idea was to drop off the kids, figure out our transportation and do a CV crawl starting one afternoon, finishing whenever. It took eight months to finally align the moons with the stars and we had a great time! Our original plan was to start at the Player’s Retreat and end at Foster’s rooftop bar, with some great stops along the way. We had to alter our plans slightly upon learning that Fosters just recently had been closed down (sad!) but of course we made do. Here’s our journey (and thanks to Pat for joining us for part of the trip!)

We started at the PR, which is located on the corner of Hillsborough St. and Oberlin Rd. As mentioned in an earlier blog post, the PR has seen a recent revival and now sports a few Wine Spectator “Top Rated Wine” list awards as well as an awesome selection of single malt scotches. Pat and Brad started with beers and I opted for a spicy Bloody Mary. We thought it wise to fuel our stomachs as well and Pat and I enjoyed some awesome Gabby burgers, while Brad chowed down on a Turkey Sheila. Great food and drinks, great bartender and still a great place, celebrating 60 years in business! It was hard to leave.

Next stop – Village Draft House. According to its website it has 99 beers on tap, and we each enjoyed a couple. I’ve been a patron since its doors first opened and love its burgers, potato skins, beer selection and outdoor seating (with water-filled doggie bowls if you want to bring your four-legged friends.) Family friendly, especially if you sit on the non-bar side. Bartenders were great!

Cameron Bar and Grill, right around the corner, was our next destination – mimosas for Pat and me and beer for Brad. Again, great bartenders! I’ve been here on many occasions with family and friends, both for food and drinks. The restaurant is family friendly, and the bar area is traditional with rich, dark wood and a number of flat-screen televisions, always showing some sort of sports. Pat said her goodbyes after this stop as she had another obligation later that evening.

Brad and I then  headed to Café Caturra, a fairly new Cameron Village venue. Just my luck it was $6.00 Sangria Saturday – score! This sangria is made with white wine, champagne and assorted berries – quite simple, and so refreshing. The blueberries, strawberries and raspberries give the drink a warm pink color. It is awesome! Brad got some sort of red wine. Café Caturra offers small plates, sandwiches, pizza, salads and soups. I have not eaten there yet, but the food I’ve seen other people order looks fresh and good. It is a regional chain, with locations in Virginia, N.C. and S.C. 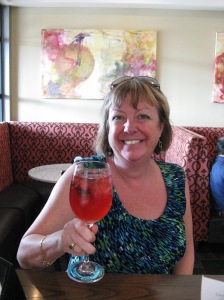 Our last stop was Cantina 18 for margaritas. Yum, yum, yum. Brad ordered a top shelf margarita and I opted for the mango one – very tasty! We decided it was time to order some more food so we wouldn’t feel totally worthless the next day. We opted for some guacamole and were happy with our choice. The guacamole was fresh with nice chunks of avacado and tomatoes and a great blend of spices. The service was so good – it was as if the bartenders were truly happy that we were there only for drinks and appetizers, and not just waiting for a table. Great place to end our crawl after all! 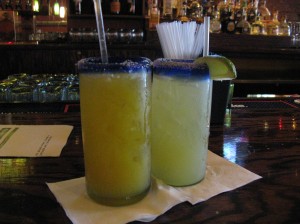 ***Note! Please, please, please – drink and drive responsibly. Take a cab. Walk when you can. Seriously.

Eat drink and be merry!