Posted on November 29, 2012 by kelleychisholm

My ex mother-in-law is a wonderful country cook. Her fried chicken is the best I’ve ever had, period. Geraldine also makes what she calls Oyster Stew. I never understood why she deemed this stuff “stew” — it was more of a soup to me, with milk, fresh oysters in their liquor, butter (lots and lots of it, Paula Deen would be so proud) and salt and pepper. That’s it. So simple to make, so wonderful to eat (especially paired with her fried chicken!)

I made Geraldine’s “stew” for years after my ex and I parted ways, until I found Emeril Lagasse’s recipe for Oyster Rockefeller Soup Garnished with Crispy Bacon and Fried Oysters. Wow! This is a “kicked-up” version of Geraldine’s stew that I absolutely adore, with heavy cream, bacon, spinach and fried oysters. Not as easy to make as hers, but oh, so worth the effort. Of course adding bacon makes everything better! 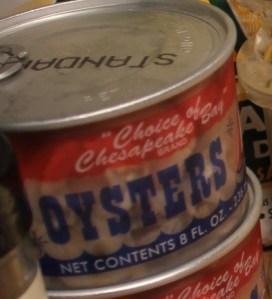 I recently found some fresh oysters in their liquor on sale and decided to combine the recipes to create the best of both worlds. And, yes, I am so happy to report success – this stuff truly rocks! Here’s my new version – I’ve tried to lighten it up some by replacing the heavy cream with light cream in Emeril’s recipe and by reducing the butter to a mere tablespoon (instead of a stick, plus) in Geraldine’s version.

For the fried oysters**

**These fried oysters make a great garnish, but I may eliminate this step next time and just have the bacon and green onions as toppings, especially if I’m in a hurry. Just add the oysters to the stew in the first step.

In a large skillet, fry the bacon until nice and crisp; drain on a paper towel. Save for the garnish.

Meanwhile, steam the spinach until it wilts, about 2-3 minutes. Remove from heat and drain. Squeeze out all of the excess moisture (I use lots of paper towels for this.)

Melt the butter in a large saucepan. Add the onions and garlic and sauté for a few minutes. 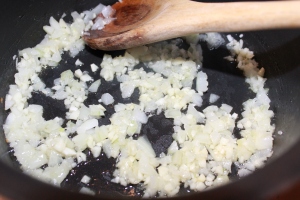 Add the cream and the oysters (except for the 10 you reserved), including their liquor, and blend well. Stir in the spinach and season with the hot sauce, Worcestershire, salt and pepper. Simmer for 20 minutes or so.

In the meantime, heat the oil in a large skillet to medium/medium-high. Mix the flours and Emerils’ Essence in a bowl. Coat the oysters with the flour mixture. 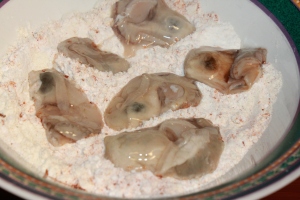 Fry until nice and crispy, a few minutes on each side. Drain the oysters on paper towels.

Pour the stew into a bowl and garnish with the fried oysters, bacon and green onions.

Serve thiswith crusty bread to sop up every last drop. Add a salad if you feel the need.

This is by far one of the *Best* soups/stews I’ve ever eaten. Ever. It is aptly named – rich in every drop! I would proudly serve it to royalty, but more especially, my friends.