Brad and I bought our house in late 2006 and started moving in the following spring. It’s a funky and modern home — an envelope house, if you will, which basically means it’s a house inside of house and is passive solar. We have four different levels, with non-heated atriums on the first three floors. For the most part, each level mimics the other, except the very top, which does not have the atrium and has a slanted roof instead. If you count the atrium space, we have approximately 4,400 square feet, sitting on almost ¾ acre wooded lot.

The house was a foreclosure, which was the only way we could afford something with so much room in this location. It was built in the mid-1980s, which certainly is reflected in the kitchen (and bathrooms, but I’m not even going there.) The kitchen itself is miniscule (90 sq. ft.) – I guess they didn’t cook much in the 80s, LOL.

Luckily, cabinet space has not been much of an issue, since a wall of them live right outside the kitchen proper. 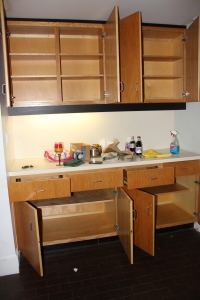 Anyway, we knew one of our first projects was going to be a complete kitchen remodel, right after we had the deck built a few months after moving in. I’m talking all new appliances, cabinets, floors, counters, lights, etc., plus knocking down a load-bearing wall (see below), adding an island, moving plumbing and enlarging a window. A major undertaking, to say the least!

Numerous things happened to get in the way of the remodel, from having Gabe and Lexi moving in with us in early 2007 (definitely worth the wait for the remodel!), to the economy tanking, to a number of other unforeseen expenses, etc. As Roseanne Roseannadanna would say, “It’s always something — if it ain’t one thing, it’s another.” (RIP, Gilda Radner.) And it has been one thing after another.

A couple of years ago we met with a great designer, had plans drawn up and even picked out cabinets.

We had a structural engineer come in to advise us on taking down the load-bearing wall and interviewed several contractors, but before we could agree on anything, life got in the way again. I finally announced late last year that we WOULD have a new kitchen in 2014, come hell or high water. I just couldn’t take the corner sink, worn appliances and lack of space anymore. And I guess the kitchen gods listened, because now it’s finally becoming a reality.

So, during the past several months, we hired a great contractor (more about Daniel and his company in later posts), had a gas line put in (one of my must haves), selected our appliances and ordered the cabinets, which came in a couple of weeks sooner than expected!

That meant we had to scramble to choose our countertops, floors, backsplash and sink, which we did last Saturday in an hour (yes – one hour!) Actually, when you’ve been looking as long as I have at finishes, etc., this step was not as hard as you may imagine. Not to mention packing up all of the dishes, food, etc., and setting up a temporary kitchen space downstairs. 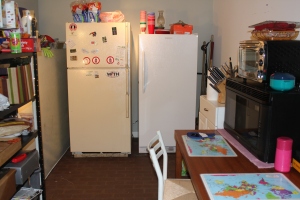 Demolition started on Monday and I was amazed how much was accomplished in one day, as seen in these before and after shots. 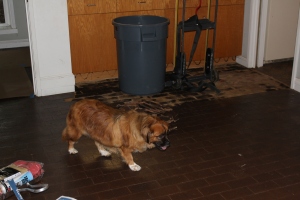 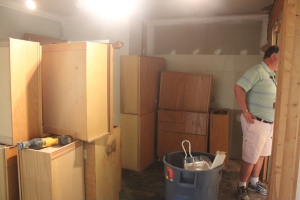 I will be posting regularly about this much overdue remodel and hope you will follow our journey as we finally get a kitchen. Out with the cramped space, butt-ugly floor, nasty stove and oven, worn countertops and small, leaky refrigerator. And in with … well, you will just have to wait and see as the weeks go by. 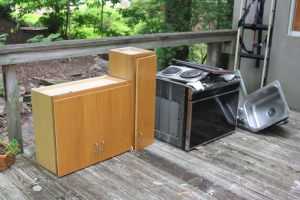 Eat drink and be merry!