Posted on March 8, 2015 by kelleychisholm 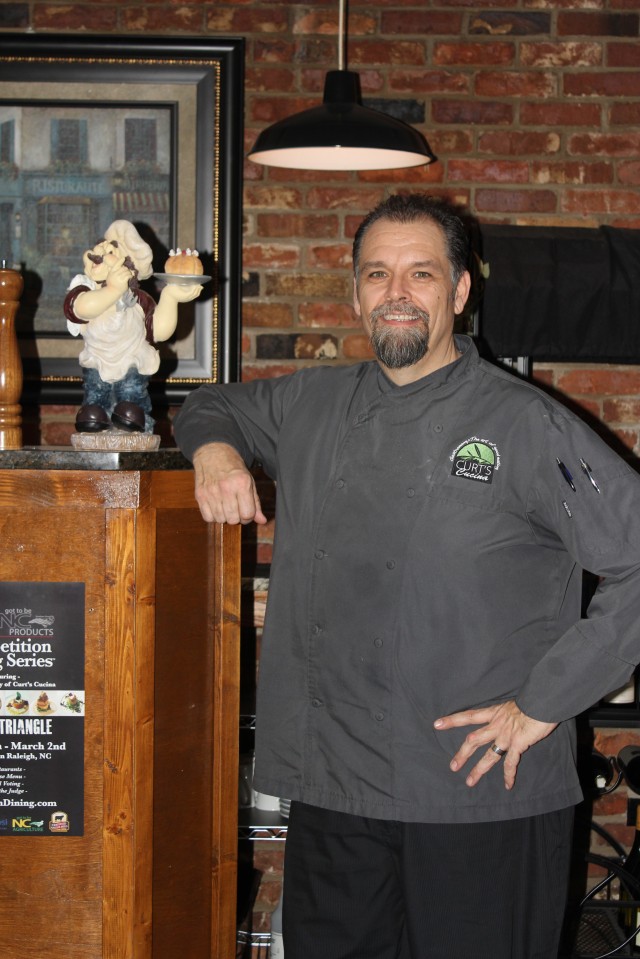 As part of the Got to Be NC Competition Dining Series, Triangle 2015, I have had the pleasure to interview the talented chefs from the four Raleigh restaurants participating in the competition, as well as one of the finalists. It’s been great to learn more about their culinary experience, why they think they have what it takes to win, and other fun tidbits about them.

I was so happy to sit down and talk with Chef Curt Shelvey, owner of Curt’s Cucina (www.curtscucina.com) in Southern Pines, especially since I was fortunate to be a media judge in his quarter-final battle and savored three wonderful dishes from him and his team. Chef Shelvey and I have had several humorous conversations on Twitter about the competition, so it was great to meet him a person and learn more about his background.

Chef Shelvey is humble yet passionate about his profession. A self-described “good ol’ boy,” he doesn’t take himself too seriously and is mainly concerned about having fun in the kitchen and taking care of his customers. 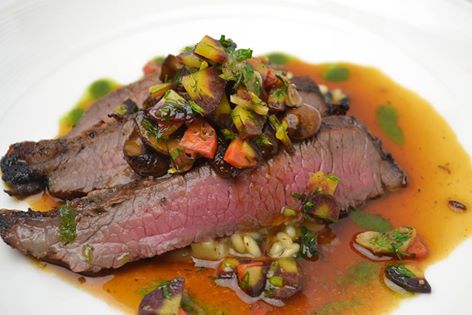 Kel’s Café: How did you get into the industry and where did you train?

Chef Shelvey: When I got out of the Marine Corps, I got an apprenticeship through the American Culinary Federation at the Cloister Hotel in Sea Island, Ga. and became a certified executive chef with the ACF. After the apprenticeship I got a job offer with the Pinehurst Resort and Country Club and was eventually promoted to executive chef.

In 1999 I had a job offer to teach culinary classes at Sandhills Community College and was there for eight years. One of my students who had graduated from Sandhills opened up a restaurant, the Coach Light Trattoria. While I really enjoyed teaching, I love being in the kitchen and the dining room and creating new dishes. The Coach Light was having some problems, so I agreed to a one-year contract to help turn it around, which we did. At that point, I was offered a job to teach at North Carolina Central University in Durham as a clinical culinary instructor. I was there for two years, but a new dean came in and required that all instructors have a Ph.D., which I did not have.

I had a few corporate job offers, but did not want to work all of the long hours, so my wife suggested I open my own place. This building became available, so I took my savings, borrowed a bit, and opened my doors on July 15, 2011. The community has been phenomenal in its support of the restaurant.

What led me to Italian cuisine is that I grew up in an Italian neighborhood in New England and worked in Italian restaurants throughout my childhood, washing dishes and learning how to prep. I was on the line at 16 years old. I knew as a child I wanted to be a chef, and my father encouraged me to pursue my passion. I love cooking food and I love my customers. 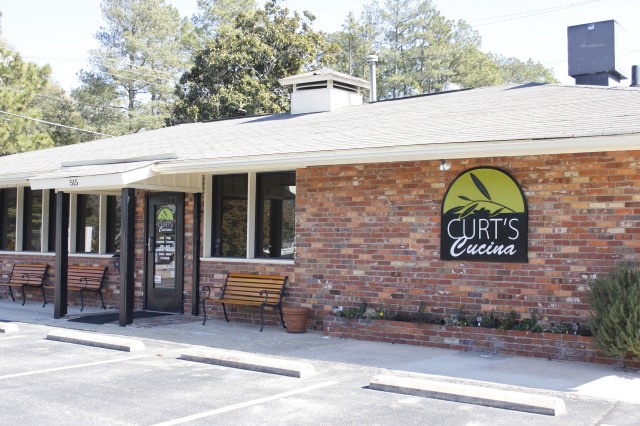 Kel’s Café: Is this your first time competing?

Chef Shelvey: It’s the first time with Competition Dining, but I have competed with the American Culinary Federation, and I find it ironic that the final two chefs, Chef Ryan Conklin and myself, are ACF-certified executive chefs.

Kel’s Café: Tell me about your team in the competition.

Chef Shelvey: My teammates are my sous chef, Ryan Laton, who has been with me since day 1 and is passionate about cooking, and Chad Blackwelder, who graduated from Johnson and Wales Culinary School in Charleston, S.C. and who I’ve known for years.

Kel’s Café: What has been your favorite part of the competition so far?

Chef Shelvey: They are so much fun! My first battle with Chef Cowden was like being in the kitchen with one of my old buddies — we talked, we joked, we helped each other out. If he needed a hand or I needed a hand, we were there for each other. And we both agreed that at the end of the day, it wasn’t about us but it was about the diners and putting out good food. The day in the kitchen when we battled Chef Chelsi Hogue was so much fun, and we had a blast with Chef Spencer Carter of Weathervane in Chapel Hill.

Chef Shelvey: Unbeknownst to me, my staff sent a request to Chopped on my behalf. They wanted my résumé and a lot of information about my background and cooking style. So I submitted everything and got a confirmation back that I was on a casting call and that they would be in touch. I get occasional emails that I am still in their casting call. I would love to do this!

Chef Shelvey: It’s my gnocchi Bolognese. There are so many different ways to make gnocchi, and I learned from a dear friend and great chef, Rinaldo Montrosse, who owns Villa Romana’s in Myrtle Beach, who had kept his recipe secret for years.

Kel’s Café: What has been your best moment(s) as a chef?

Chef Shelvey: Being nominated Best Chef in America by my peers in 2013, 2014 and 2015. To have my peers feel that way about me speaks volumes and I was really humbled by that.

Kel’s Café: What has been your biggest disaster at Curt’s Cucina?

Chef Shelvey: About a month after I opened on a typical, hot August weekend, the air conditioner died, and two of the three fans on the hoods in the kitchen burned out. The restaurant turned into a sweat box, and it was horrendous. I had a full house and it was like an oven in here. I did a lot of apologizing, comped a lot of food, and gave out a bunch of certificates for people to come back.

That was the first one. The other disaster happened around 7:30 on a busy Saturday night. There was a bad storm and the power went out on the entire street. Again, I apologized to everyone. We wound up putting candles on all the tables, and I told the guests if everyone was willing to stay, I’d feed all of them. I have these hats that have lights under the rims, so the chefs wore those and prepared the meals. We got everyone fed and finished about 9:30. As soon as the last person walked out the door, the power came back on [laughing.]

Kel’s Café: What is your favorite cooking tool, besides your knives?

Chef Shelvey: If I had to pick one, it would be my handmade wooden spoons, which I am very particular about. I just got them from a guilded carpenter out of Greensboro. These 18” wooden spoons are made from maple and I use them to make my gravies, risottos and polentas. I love working with wooden spoons as opposed to metal ones.

Kel’s Café: Do you locally source your ingredients?

Chef Shelvey: I try to. I use Heritage pork, North Carolina poultry, beef and eggs, and all of my seafood is from N.C. Many Italian restaurants will try and import their ingredients from Italy, which I was doing at first, until I learned more about the area and especially Pate Dawson Southern. We try to support our local farmers as much as we can, but it’s not like the Triangle or Asheville where the produce is more abundant.

Kel’s Café: Do you do most of the cooking at home?

Chef Shelvey: Oh yes! My wife will tell you that’s why she married me. My 10-year old daughter loves to help out and tells everyone that she’s taking over when I retire. She helps me prep in the kitchen and knows how to make homemade gnocchi as good as my sous chefs. She helps in the dining room and buses tables and seats people – she loves being here.

Kel’s Café: What do you like to do in your spare time?

Chef Shelvey: Ride my Harley-Davidson. I’ve been riding since my early 20s – I love to get on my bike and ride on side roads in the Carolinas. If my wife’s not riding with me, my oldest daughter loves to ride.

Kel’s Café: What advice do you have for up-and-coming chefs?

Chef Shelvey: Have a passion for what you do. Put your heart and soul into it. Don’t accept mediocrity. Cook with love, give it 110%, and learn as much as you can. And have fun!

I thank Chef Shelvey for spending time with me and wish him the best of luck as a finalist in this leg of the competition. I wish I could attend this battle!