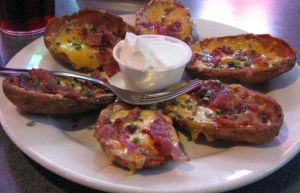 Potato skins are one of my favorite bar foods. Traditional skins are usually filled with bacon and cheese (who can argue with that?) and maybe some green onions or chives, with sour cream on the side. I think the first ones I ever tired were at T.G.I. Fridays in the mid-80s, and I’ve been hooked ever since.

My favorite place to get potato skins in Raleigh used to be Crowley’s on Medlin Drive. I was thrilled when we bought our current house, which is less than two miles away from the restaurant. For me, these were the best skins in Raleigh for a couple of decades running. That is, until recently. The last couple of orders I’ve had have been pitiful – definitely not up to its old gold standard. This makes me so, so sad, but I decided to put on my big girl pants and find a worthy replacement or two. And I’m so glad I did, because I found several.

Here are my top five places to get potato skins in Raleigh:

Yum, yum, yum, yum, yum. These skins ($7.99) are so good – lots and lots of crispy bacon and melted cheese with the right amount of potato and still some crunch. Notice the long potato wedges, which I think are great. Love! BTW, if you are a Giants fan, there is a fan club that meets at Duffy’s during the NFL season when the games are not locally televised.

***Please note that Duffy’s recently closed and will soon reopen as another Hibernian Pub, which is a good thing for North Raleigh! (updated 10/17/12)

These crispy fried potato skins come filled with BBQ short ribs (yes, short ribs) and Ashe Co. pepperjack cheese ($9.00). Wow. Just wow. I have to admit that I adore beef short ribs, so I was excited to try these skins. They rock! What a great twist on traditional skins. And believe it or not, I didn’t even miss the bacon. Draft hasn’t been open long, but I must say between these skins and its awesome burgers, this is becoming a great place to go watch games.

Luckily, Edwards Mill Grill is close to home. These skins ($8.99) are fantastic and come with lots of cheese and a good amount of bacon. The potatoes are long wedges (like Duffy’s), which I do prefer. These skins are only listed on the restaurant’s dinner menu, but I asked for them at lunch and the chef was more than happy to oblige. There is a great little outside seating area that I took advantage of since it was beautiful outside. Totally recommend!

What I love about these skins ($7.50) is that you have the option to add chili to them for $1.00 more. Good choice – the chili made them even heartier. I would have like a bit more bacon, but the chili did make up for that. Good amount of mozzarella and cheddar cheese. These are a great alternative to my usual Gabby burger order.

Sawmill’s skins ($6.49) have been a favorite of mine for years, especially when I used to live closer to the restaurant. Again, lots and lots of crispy bacon and cheese, and one of my favorite things on the menu. If I’m in the neighborhood, I often stop and get an order to go. Or, for a different twist, try the New Orleans skins ($7.99) with Andouille sausage and bleu cheese crumbles – also quite tasty!

These next places (listed alphabetically) are also quite good and I would not hesitate to order skins at any of them.

Pair these skins ($6.99) with a Brickhouse spicy Bloody Mary, and you have a winning combination. I wish Brickhouse would upgrade its televisions, but since it is so close to home I can overlook that. They have great outside seating area. Plus I have a soft spot for Brickhouse since this is where I won YMCA’s third annual chili cook off.

These skins ($6.99) were nice and hot when I got them. They had an average amount of bacon and plenty of cheese. Quite nice! Also, for an additional $1.50, you can get them with BBQ chicken, which I will definitely try next time.

These skins (6 of them for $7.98) were so good – plenty of cheese and, more importantly, plenty of bacon. This is a great sports bar, especially if you are a Wolfpack fan. If it had been around when I was at NCSU as an undergrad, I probably would have been there a lot. 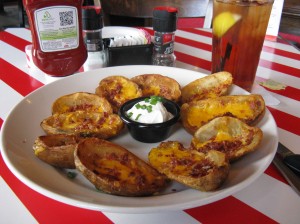 I feel compelled to include the skins at Friday’s on my list, because, well let’s face it, they are good. I have to admit that I don’t go to Friday’s that often, but whenever we travel by car I’m more likely to stop there for a meal than at your average fast food chain, especially with the kids in tow. These skins are great, with lots of crispy bacon, cheddar cheese and green onions.

And finally, I don’t mean to toot my own horn (well, yeah, I do), but my savory sweet potato skins are probably my favorite of all.

I use sweet potatoes instead of regular ones to make my own skins. Once you try these, you may never want skins made from regular potatoes again. These are absolutely fabulous and so easy to prepare! Click here for the recipe.

This entry was posted in Tools of the Trade. Bookmark the permalink.