Posted on February 11, 2014 by kelleychisholm 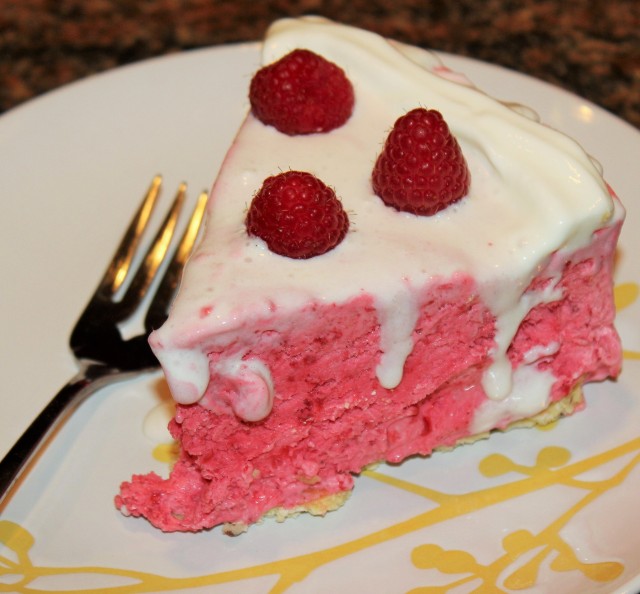 Pink, it was love at first sight ~ Steven Tyler, Aerosmith

Brad’s sister, Karen, sent me their grandmother’s recipe for this frozen raspberry torte and I thought this would be a great dessert to make right around Valentine’s Day, with its pretty pink, red and white colors. I knew it would be a hit with Lexi since she adores raspberries, and I thought Gabe would like it as well (right on both accounts!) Brad didn’t remember his grandma being big on baking, but when I told him the only thing that required cooking was the crust, he agreed that this would be something she would love to make.

I’m not sure if I made this exactly right because some of the ingredients were buried throughout the text of the email and some of the directions were not exactly clear (or in some places, nonexistent.) But I did the best I could, especially with the topping, which looks a bit different in the photos than what the recipe calls for because I thought I was supposed to use canned whipped cream. My bad. But Gabe didn’t mind. He pitched in with some great decorating tips, one of which to incorporate that canned whipped cream  (I think all he really wanted was to squirt some of it in his mouth!)

This is soooo good and the almonds in the crust pair quite well with the raspberry filling. Although the original  recipe did not call for fresh raspberries, I added some to the top of the torte with excellent results. Next time I make this I will cut the sugar some, down to three-quarters or even half a cup. I think you could easily substitute strawberries or even mixed berries for the raspberries if desired. 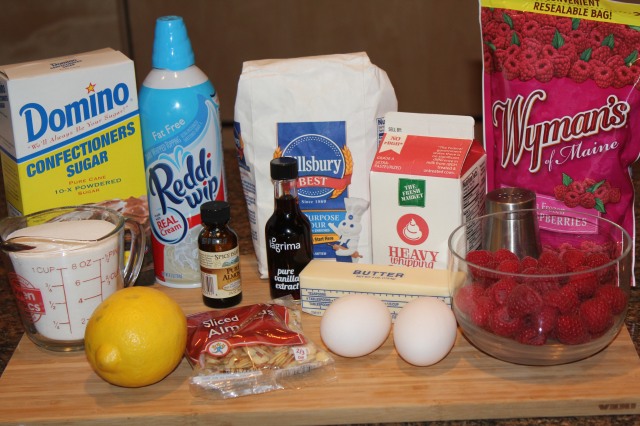 Make the crust by creaming the butter with the sugar and egg yolk. 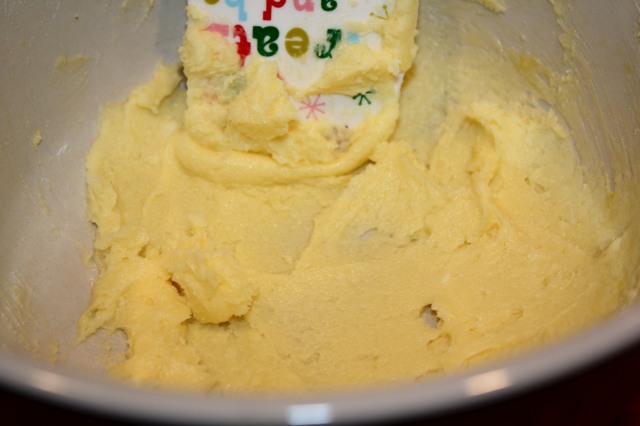 Mix in the flour and almonds. 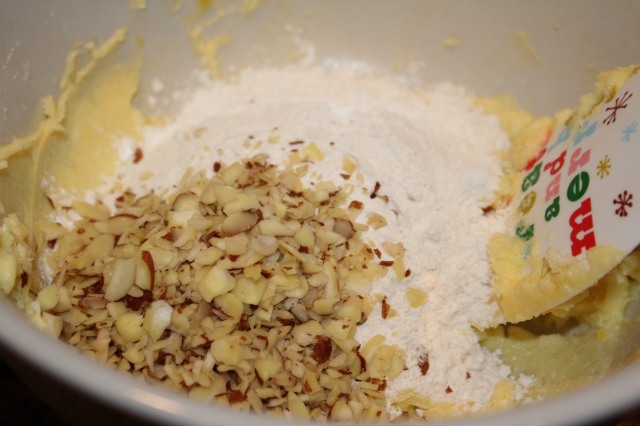 Press the mixture in the bottom of a greased 9” spring form pan.

Bake for 10-12 minutes until crust starts to brown. Let cool.

Place the partially thawed raspberries, sugar, egg white, salt and lemon juice in a large bowl and beat with an electric mixer until stiff (about 3-4 minutes on medium to medium-high speed.)

In a separate bowl, beat 1 cup of the whipping cream until stiff (again using the electric mixer.) Fold this into the raspberry mixture, along with the almond extract.

Pour on top of the crust, cover with aluminum foil and freeze. 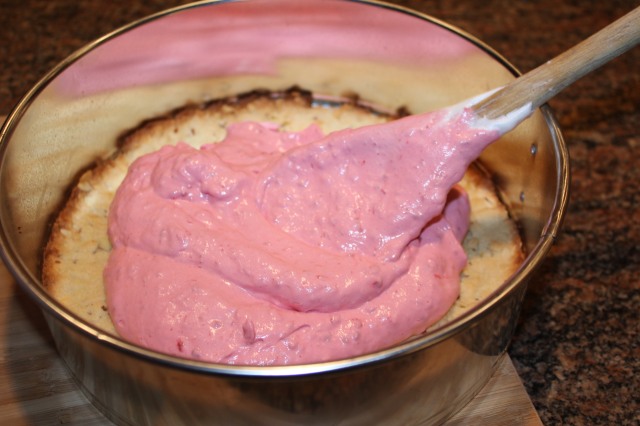 Remove the torte from the freezer 15 minutes before serving. 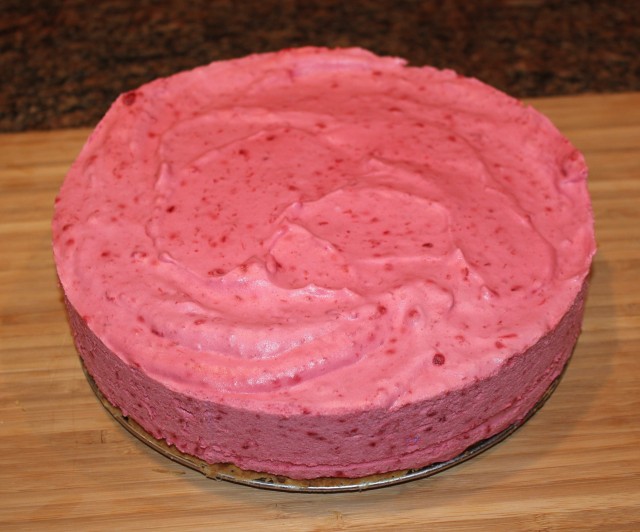 Make the topping by beating the other cup of whipping cream, powdered sugar and vanilla extract until stiff, and place on top of the torte.

Take the canned whipped cream (here comes where we improvised) and pipe it along the edge of the torte. Add the fresh raspberries and enjoy! 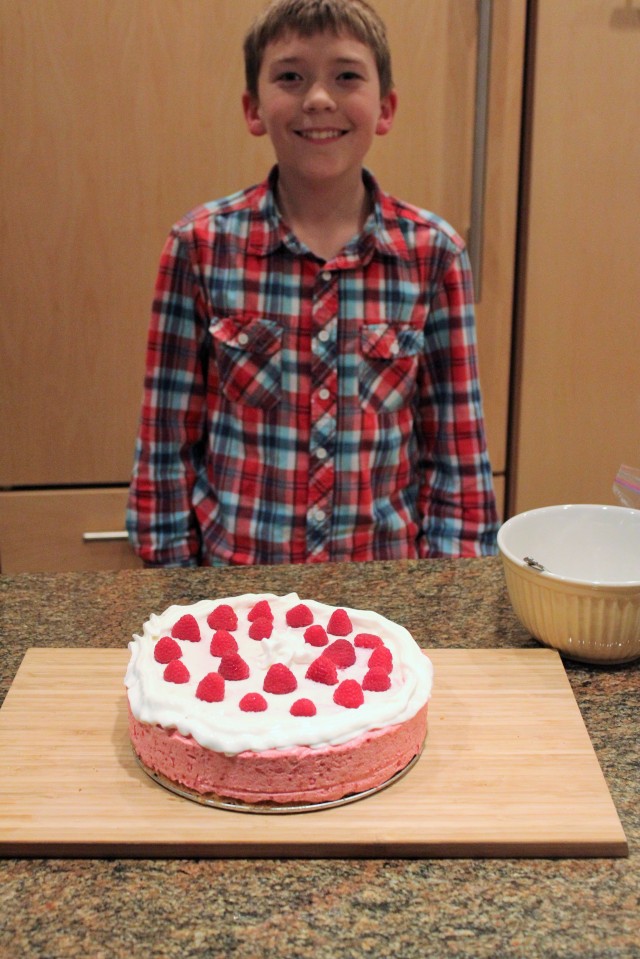 Place the torte back in the freezer if you have any leftovers – it should keep for a day or two.

In addition to Valentine’s Day, this would make a great dessert for a baby (girl) shower or a nice luncheon. I think Grandma Chisholm would approve!