Posted on October 31, 2011 by kelleychisholm

“Close to Home” is a new category on my blog and will feature reviews of restaurants within a 3-mile radius of my home. Luckily, there’s a wide variety of them (such as McCormick and Schmick’s, which I reviewed earlier this year), so this is going to take a while. But I don’t mind, especially with my upcoming kitchen remodel that equates to eating out more. And it is making me try some neighborhood places that I’ve unfortunately neglected, such as Chubby’s Tacos, which is the focus of this review.

I finally got around to going to Chubby’s Tacos a couple of weeks ago and my only regret is that I haven’t gone sooner. This place rocks, so much so that I went back for lunch two more times that same week (Shout out to Lee at FMI for his ringing endorsement!) Everything I’ve had so far has been fresh and seasoned perfectly. Chubby’s has a good selection for vegetarians, plus you get a lot of food for the money!

According to its website, Chubby’s Tacos opened in Durham on Cinco de Mayo 2008, with its “award winning salsas and fresh ingredients quickly rocketing it to success, virtually overnight.” In less than a year, Chubby’s Tacos opened a second location in Raleigh in the Lake Boone Shopping Center (2444 Wycliff Road.)  It now has five locations in the Triangle area. Lucky for me, Lake Boone Shopping Center is less than 2 miles from my home!

Chubby’s menu includes tacos, burritos, quesadillas, gorditas, taco salads, tortas and nachos. It has a great little salsa bar with a nice variety of homemade salsas. It also has full ABC permits and carries a number of Mexican beers. I’ve heard the margaritas are quite good, but will have to wait for a non-work day to try them. The prices are great – tacos range from $2.00 – $3.00, and there is nothing more than $8.00 on the menu. For $2.00 extra, you can add rice, chips (which are light and warm) and your choice of refried or black beans to whatever you are ordering. 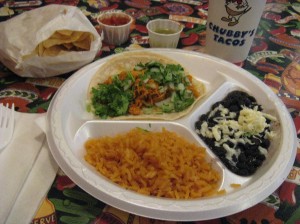 So far I’ve tried a couple of different $2.00 tacos and the house burrito ($5.00). I’ll start with the burrito – this thing weighed a ton. It is made with a fresh flour tortilla and comes with rice, refried beans, lettuce, cheese and a choice of one additional filling. I chose Barbacoa, with is Mexican BBQ beef with cilantro and onions. The beef was so tender and perfectly seasoned. I had just started eating when a friend of mine walked by my table and was in disbelief that I had ordered the burrito. “You will never finish that!” he said. He was right – I barely could eat half of it (the leftovers were so good the next day.) If you order this, bring your appetite, or be prepared to take some of it home.

One of the tacos I tried was the Spicy Tinga Chicken, which includes onions, chipotle peppers and cilantro. The chicken is shredded, tender and quite tasty. The tortillas are fresh. I “made it a meal” for the extra $2.00 and was pleasantly stuffed when lunch was over.

My favorite thing at Chubby’s so far has been the Carnitas tacos, which come with shredded pork, cilantro and onion. I have dreamed about these things since my first taste. The pork is awesome and they are so addictive. Make sure you try these if you go!

If you go for lunch, try to get there early or late – the place is small and the crowds are big. The inside is festive, with bright colors and cool tabletops. There is some outside seating available, but that usually fills up quickly when it’s nice outside.