Posted on February 14, 2013 by kelleychisholm

What’s not to love about Cornish game hens? You get your own little cute bird, stuffed the way you like. Cornish game hens, also known as rock hens, are a type of domestic chicken and can be either male or female. They are less than five weeks old and do not weight more than two pounds ready-to-cook weight. Cornish game hens are usually more expensive than normal hens, so when I saw some on sale, I grabbed a pack of two to make one night for Brad and me.

Brad and I both like our game hens stuffed with wild rice, but this time I was in the mood for a bread-based stuffing — aaaaah, comfort food. And that’s the beauty of Cornish game hens — since they are so small and each hen is an individual serving, you can show some love and stuff them to the eater’s preference. I wound up making Brad a Cornish hen stuffed with wild rice and mushrooms, while mine had an apple-walnut-cornbread stuffing. The winner? More on that in my next post, but I must say it was seriously close and both rocked (no pun intended!)

Here’s my recipe for Cornish Game Hens with Wild Rice and Mushroom Stuffing. I used chanterelle mushrooms for this, which were awesome! However, feel free to substitute baby bellas, shiitakes or any other type of mushrooms that strike your fancy.

Cook the rice according to the directions on the package. Transfer it to a large bowl once it is ready.

Preheat oven to 375 degrees F. Heat 2 tablespoons of butter in a medium skillet. Add the mushrooms and shallots and sauté for 5 minutes or so.

Add the mushrooms to the rice. 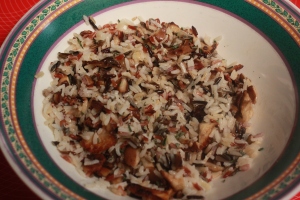 Remove the leaves from the rosemary, finely dice them and add to the rice mixture, along with the thyme.  Season with salt and pepper to taste.

Sprinkle the Cornish hens inside and out with salt and pepper. Stuff each hen with the rice and mushroom mixture. 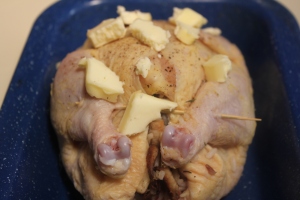 Cut the butter into small slices and dot them on the birds. Bake 40 minutes or so, until the internal temperature reaches 165 degrees F. Baste several times as the hens cook. Let the hen sit for 5-10 minutes before slicing.

Doesn’t that look great? Yum, yum, yum, yum, yum. Brad pulled away the skin on his hen before I could get a good picture of it plated, but you get the idea. 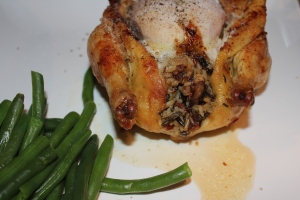 I did have extra rice and mushroom stuffing left over since I made enough for two hens, which was great since it is fantastic as a side dish, which I had with my stuffed hen.

So stay tuned for Cornish Game Hens Stuffed Two Ways, Part Two: Apple-Walnut-Cornbread Stuffing, which I will post soon. In the meantime, here’s a sneak peak.