Posted on January 20, 2015 by kelleychisholm 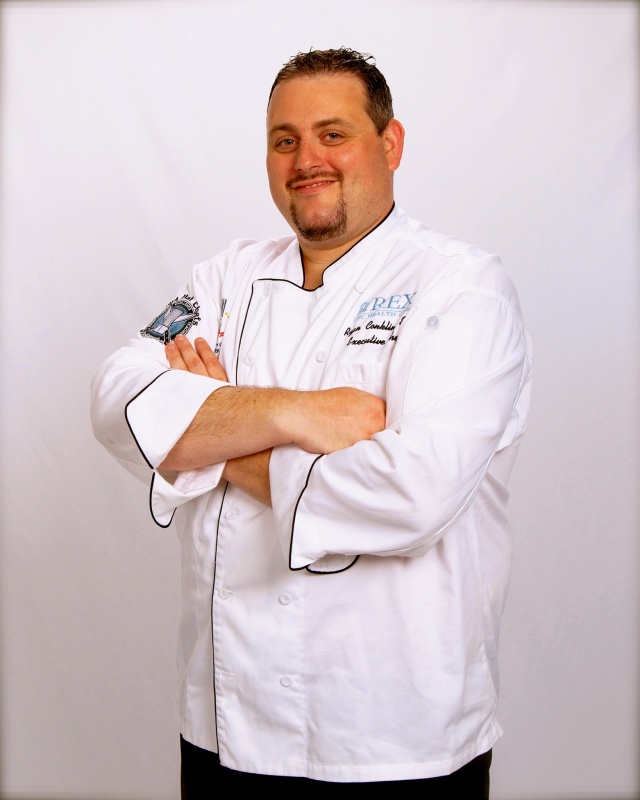 As part of the Got to Be NC Competition Dining Series, Triangle 2015, I had the pleasure to interview the talented chefs from the four Raleigh restaurants participating in the competition and learn more about their experience, why they think they have what it takes to win, and other fun tidbits about them.

A hospital chef in the Got to Be NC Dining Competition? Really? Really! Ryan Conklin is the executive chef for Rex Healthcare in Raleigh, N.C. A native New Yorker (but loyal Carolina Hurricane’s fan!), Chef Conklin is a graduate of The Culinary Institute of America and has worked in restaurants in Manhattan (The Four Seasons Hotel); Limerick, Ireland; Sarasota, Florida; and New York’s Hudson Valley region.

Chef Conklin made the switch to health care more than 11 years ago and Rex Healthcare (patients, staff and visitors) has certainly benefitted from his skills, experience and commitment to bringing freshness and quality to modern health care cuisine. As a recent patient at Rex, I can tell you firsthand that I was impressed with the room service menu and food! 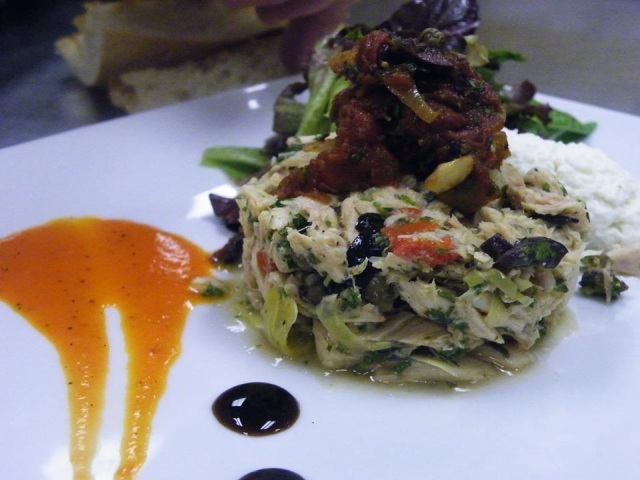 I had the extreme pleasure of sitting down with Chef Conklin and learning about the health care side of the restaurant industry. He was so gracious and passionate about what he and his team are doing. I was treated to a behind-the-scenes tour of the kitchen and the two restaurants in the hospital, and left impressed and quite excited that there are visionaries like Chef Conklin right here in Raleigh. He just may be the dark horse in this competition.

Chef Conklin: Oh gosh, you know, being in health care for the last 11 years, it’s hard for me to say. I’ve been lucky to be in some food competitions and, in 2012, I won a competition in Miami. The dish we made for that, which was devised by my teammates and me, has become so special.

Kel’s Café: That was a Cuban-inspired chicken dish?

Chef Conklin: Yes. We called it Chicken “Ropa Vieja” and we served it with an heirloom black barley salad with mango, jicama and a plantain mojo sauce. It was a gold-winning dish!

Kel’s Café: So you have some experience competing, just not in the Got to Be NC Competition.

Chef Conklin: Yes, I have competed a handful of times in other competitions. I won a gold medal, I think in 2010, for North Carolina Prevention Partners. Alton Brown from Food Network was a judge. UNC and I partnered and took on all of the other hospitals in North Carolina, and wound up winning!

In the Association for Healthcare Foodservice Culinary Competition in Miami that we won in 2012, Norman Van Aken was one of the judges, which was great because he is such a top chef and has driven the Florida/Caribbean food movement. For him to pick the winning dish was really something special.

I’m also a certified executive chef for the American Culinary Association. In order to gain certification you have to cook a dish for other chefs. That was very challenging to be critiqued by other industry professionals.

Kel’s Café: Are you familiar with your competitor, Chef Trey Cleveland of Top of the Hill Restaurant in Chapel Hill?

Chef Conklin: No, not really. I met him on media day and he seems very talented, but that’s about it.

Kel’s Café: Who are you taking with you to the Got to Be NC dining competition?

Chef Conklin: I am so excited about my team! My teammates ultimately are going to lead to our success. Chef Steve Pexton is very passionate about great food and one of the most talented chefs I’ve ever worked with. His attention to detail is spot on and he’s really good at developing bold flavors. I’m also bringing Colin Jennings, one of our cooks here, who’s a workhorse. He brings a lot of input to the table and he just wants to compete. He’s going to be great!

Kel’s Café: Being a hospital chef versus a restaurant chef – tell us more about this.

Chef Conklin: I grew up in the industry as a pot washer and prep cook. After culinary school, I did work at Four Seasons. I worked in Ireland as well, and learned some great cooking techniques over there.

Kel’s Café: Tell us more about Ireland. You were in Limerick, if I remember correctly.

Chef Conklin: Yes. It’s a great working town and not a flashy city by any means. I worked in Limerick in a French bistro that is closed now, and lived in an apartment above a Domino’s Pizza. It was a great environment and just to learn the wording was interesting, because the words they use in the kitchen are different from those in the U.S. For example, what we call zucchini in the U.S., they call courgette in Europe.

Kel’s Café: When I visited Ireland I remember eating a lot of lamb and salmon.

Chef Conklin: Our chef at the bistro would go to the fish house and pick out the salmon in the morning. The folks at the fish house would filet it and the cooks would pick it up on their way to work. When we got our prime rib or rib eye, we would have the butcher come to the restaurant with the rib in butcher paper, and if we didn’t like what he brought, he’d bring us another one. It was really that old-school environment, and just to be a part of that was something very special.

In that kitchen there were no freezers and the food came in every day. The space was so small and you had to work with what you had. What a great experience!

Kel’s Café: What made you switch to the health care side of the industry?

Chef Conklin: I was working in New York’s Hudson Valley region as an executive chef and was at the point in my life where I was getting married and buying my first house. An opportunity came up at a local health care institution for a chef/manager. At the time it was a cut in pay, but there were better benefits and a better quality of life.

I was there for four years and quickly found out there are simple things you can do in a health care environment that can make a big impact on others right away. For the patients, for the coworkers — it was really great to get instant rewards. In a restaurant, a chef can go out to the dining room and get compliments once a day, but in health care you are getting hundreds of compliments a day. You can go into a patient’s room and see how they liked the meal and make a connection — that’s when I really began to get a passion for it. I also realized there’s much potential on this side of the industry, and we started doing some special things in New York.

Kel’s Café: How did you wind up in Raleigh?

Chef Conklin: We wanted to move south, so I started looking at health care organizations that were committed to making a difference in the quality of their food. I started at UNC and then transitioned to Rex. Between both organizations, we’ve come a long way, and I like to say we’re leading the charge across the country about what the potential is for health care food.

Kel’s Café: Is there a difference between the menu for the patients and those in the cafes?

Chef Conklin: There are things that actually cross over from our retail customers to our patients. For our patients, we have a room service dining program. Our menu changes often; since I’ve been here it’s changed four or five times. Some of our retail items become so popular that we add them to the patient menu, but there are other dishes that might not work for patients. We try to keep our food as healthy as possible. We don’t have any deep fryers in our organization, and we were the first hospital in the Southeast U.S. to remove them. How cool is that?

Kel’s Café: How many meals do you serve each day?

Chef Conklin: We do about 1,200 patient meals daily, about 400 meals per service. In addition to that, we have about 3,000 retail customers daily. We have internal and external caterings as well.

Kel’s Café: What is your favorite area restaurant?

Chef Conklin: One of my favorite places is Buku, because you get to try many different small plates. As a chef, it’s very hard to narrow down one thing on a menu to try, so there I can get four or five small plates and get to taste a bunch of different flavors. Plus Buku has the whole world covered. I don’t get out to eat that often, so when I do I want to try as much as possible.

Kel’s Café: What is your favorite cooking tool, besides knives?

Chef Conklin: Good question. Besides knives, I love a pressure cooker. I’ve competed using a pressure cooker and I love how you can cook things quicker and seal in moisture and flavor. I also like simple tools like a microplane, for gathering zest. 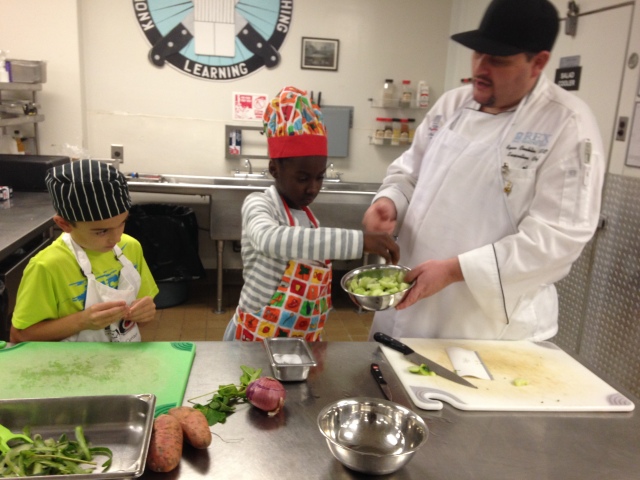 Kel’s Café: Tell me about your kids.

Chef Conklin: I have an eight-year old son who plays hockey in the Raleigh area, and an almost-four-year old daughter.

Kel’s Café: Do they like to help in the kitchen?

Chef Conklin: They do, actually. We have a big center island in our kitchen, so whenever I make something I try to get them involved. Last week I was making some pork and cilantro dumplings up and my daughter was helping me, she was really getting into it.

My son has made meatloaf with me and I actually had him rolling sushi for the first time a couple of weeks ago, which was really cool. I found a local company that makes these premade rice sheets, a unique product that’s come to the market and makes preparing sushi at home much easier.

Kel’s Café: What do your kids ask you to cook for them?

Chef Conklin: My son loves steak! We had a special-occasion dinner and I had picked up some flank steak, which we simply grilled with some shrimp. It was a really special dinner for him, and now he wants to have it once a week!

Kel’s Café: What advice do you have for up and coming chefs?

Chef Conklin: Never lower your standards. Working in a professional kitchen, as you grow into your career, it can be very easy to find shortcuts. But stay true to yourself and to the standards that you came into the business with. As a chef, when you see something wrong, you have to be the catalyst to fix it.

I thank Chef Conklin for spending time with me and wish him the best of luck in the competition! Next time I’m at Rex (hopefully as a visitor), I can’t wait to try some of the made-from-scratch pizza and some of the other healthy dishes on the menu! 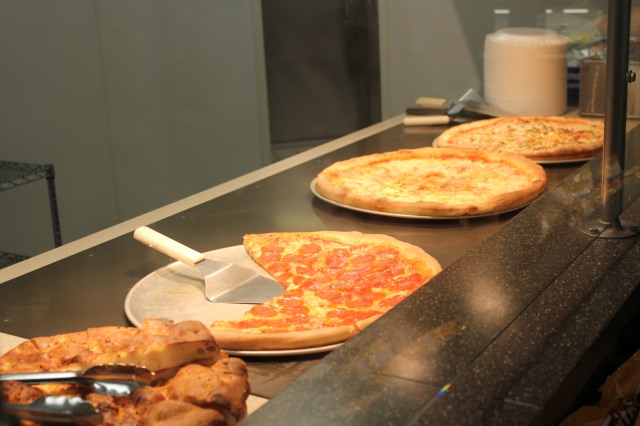 1 Response to Getting Healthy with Chef Ryan Conklin, Rex Healthcare