With all of the rain that has soaked Raleigh in the past several months, we haven’t grilled outside nearly as much as we normally would. One of the last things I made before our kitchen remodel began were these wonderful chicken and spinach quesadillas with jalapeno-cheddar tortillas and lots of yummy cheese. Delicious ! I have a quesadilla maker that I got for a Christmas present several years ago (thanks Darren and Meredith!) and often use, but it was packed so I just used a large skillet instead.

These quesadillas go great with my fresh and easy pico de gallo that I posted earlier this week (click here for the recipe.) Also, if you want a vegetarian version, omit the chicken and either double the spinach or add a can of drained seasoned black beans. 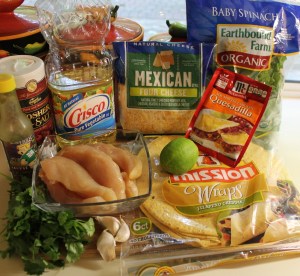 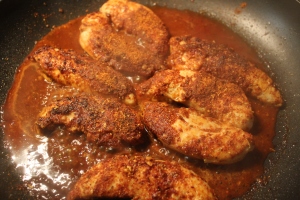 Sauté until the chicken is no longer pink inside (about 10 minutes.) You may need to add some water (half a cup or so) to the skillet while this cooks. 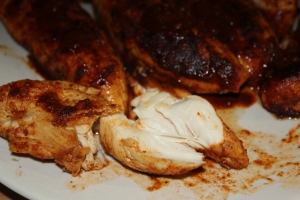 Once the chicken cools, cut it into small pieces and place it in a large bowl. 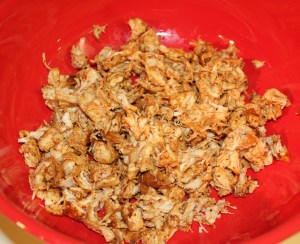 Heat the other tablespoon of oil in a large skillet. Place one of the tortillas in the pan and evenly spread 1 cup of the shredded cheese on top of it.

Cook for a few minutes until the bottom has browned. Carefully flip the tortilla over and continue to cook until that side is brown and the cheese has melted. Remove from heat and let cool for several minutes before cutting. Repeat to make the second quesadilla. 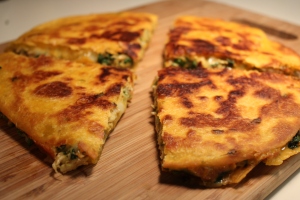 This goes great with chips and guacamole and/or a black bean salad. And a margarita to wash it all down is suggested as well!