It’s been more than a decade since several of us, on our then annual Thanksgiving trip to the Outer Banks, took a deep sea fishing trip and caught a boat load of yellowfin tuna. Seriously – more than 350 pounds of beautiful, beautiful fish, in less than an hour and a half! We were back to the marina much earlier than expected thanks to the wonderful captain and staff of Tuna Fever. It was an experience I think none of us will ever forget!

After getting our fish filleted and put on ice to bring home, I can’t remember how many pounds were divided among four couples, but it was a lot! Brad and I decided to invest in a food vacuum sealer once we got home to preserve all of our wonderful seafood bounty. And I started looking online for recipes to take advantage of our catch.

Back then I was hosting a lot of poker parties that our fishing friends attended. I wanted to have an appetizer to remind us our tuna catching trip and here’s where Rachel Ray comes in – I found her recipe online for Tuna Pan Bagnat (pronounced pahn-bahn-yah) and thought it would be great as an appetizer for all of my poker folks. And it was, with no leftovers and several requests for the recipe! Of course I had to tweak her recipe on my first try and then again over the years and am quite pleased with my latest version.
I usually use fresh tuna, grilled or poached with lemon juice, salt, and pepper, when I make this. However, my grocery store was sold out of fresh tuna (what’s up with that???) so I chose the jarred version of tuna fillets (one packed in water, the other in oil) for this version, which worked out well. Your choice, as always. With this recipe I had enough tuna mixture to fill a small French bread loaf, so if you’re not planning for a crowd, just cut the recipe in half. 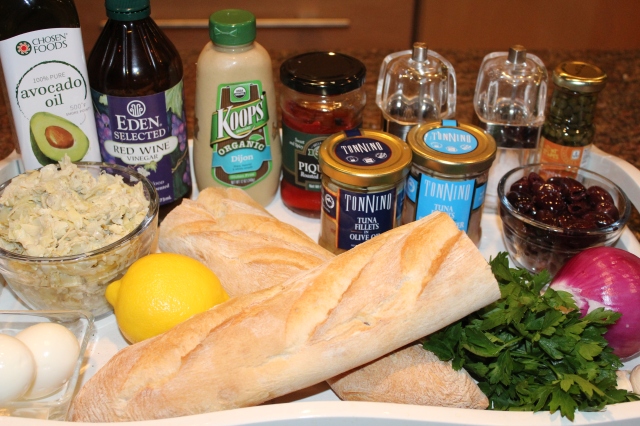 Make the vinaigrette by whisking together the oil, mustard, vinegar, garlic, lemon juice, pepper and salt. Set aside. 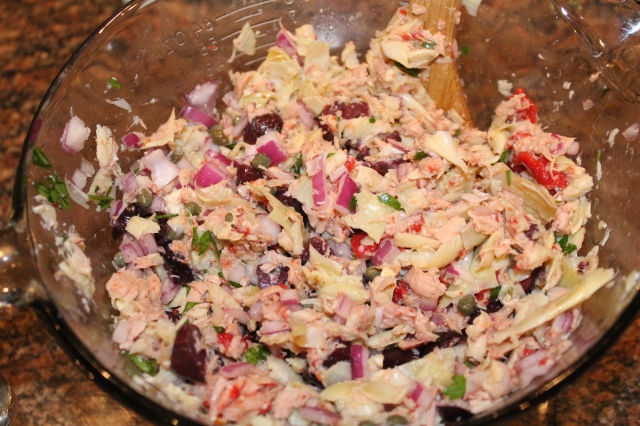 Slice each half of the baguette lengthwise. Spread the tuna mixture on the bottom halves of the bread. Be generous with the amount of filling!

Top with the egg slices. Drizzle some of the vinaigrette on top of the eggs and the rest on the bread.

Tightly wrap each sandwich with plastic wrap, pressing down to let the bread absorb the vinaigrette and salad juices. 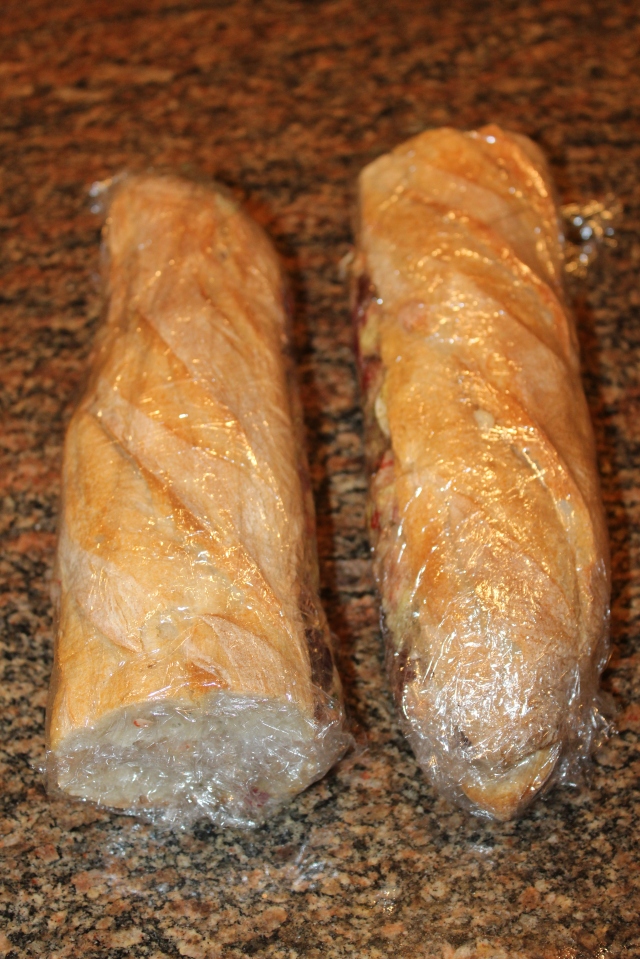 Wrap each sandwich again in aluminum foil. Place something heavy on top of the sandwiches, such as the grill press in the picture. An iron skillet or a brick will work as well. After 10 minutes, turn each sandwich over and repeat. Place the sandwiches in the refrigerator for at least 4 hours, and up to 8 hours. 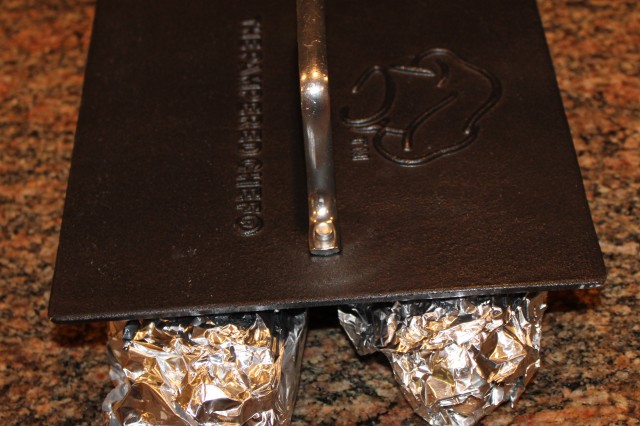 Unwrap each sandwich and cut into slices. Make sure you have plenty of napkins!