Posted on June 7, 2011 by kelleychisholm

Last week’s tip was to “grow your own” fruits, veggies and herbs – if you have the space and time to have your own garden. The reality is that many people do not. The next best thing to enjoying the fruits of your own labors is buying local, fresh produce at area farmer markets and vegetable stands. The quality in most cases is far superior to what
you get at the big grocery chains.

I feel fortunate to live in the Triangle area, where I can get some sort of locally grown vegetables and fruits almost year-round. By purchasing locally grown food, I feel like what I’m getting is quite fresh, while at the same time I am supporting the local economy. Plus the food just tastes better, especially if it was picked the same day it is sold. Give me a cucumber that looks like it just came out of the field instead of one of those waxy bright green things you get at the grocery store any day.

I live less than 15 minutes from North Carolina’s State Farmer Market, and visit it at least once a week from mid-May until late- September. I also visit it during the other months (just not as frequently) for late-fall and early-spring crops. While the State’s Farmer Market may be the biggest game around this area, it is by no means the only one. There
are numerous places statewide to buy locally grown produce, and you can find one near you by visiting the North Carolina Farm Fresh website at: http://www.ncfarmfresh.com/

Some markets only operate on a certain day of the week. I recently was in Minneapolis and there was a great downtown market that I was told is open every Thursday in the summer. There was a long row of stands offering everything from fresh produce to homemade pickles to herbs to hanging baskets to barbecue. The street was packed with people buying all of this fresh stuff. Hopefully you live in a city that has a local farmer market that is open at least once a week, if not every day.

In addition to buying from area farmer markets, there are a number of farms that will let you pick your own produce (such as Page Farms as mentioned in my earlier post, Strawberry Fields Forever.) Often these farms will have stands where you can buy whatever they are growing. 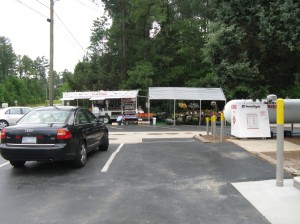 There are also veggie stands all over – citywide, statewide, nationwide, worldwide (I took the picture at the top of this post in Willemstad, Curacao, last summer.) Many times the veggies, fruits, etc. have been grown by a third party, but overall the produce from these stands is very good and better than what I get in a grocery chain. You can always ask to sample something before you buy.

Where do you buy your fresh produce, especially if you live in North Carolina? I’d love to know for future reference.

1 Response to Tip of the Week – Buy Locally Grown Produce